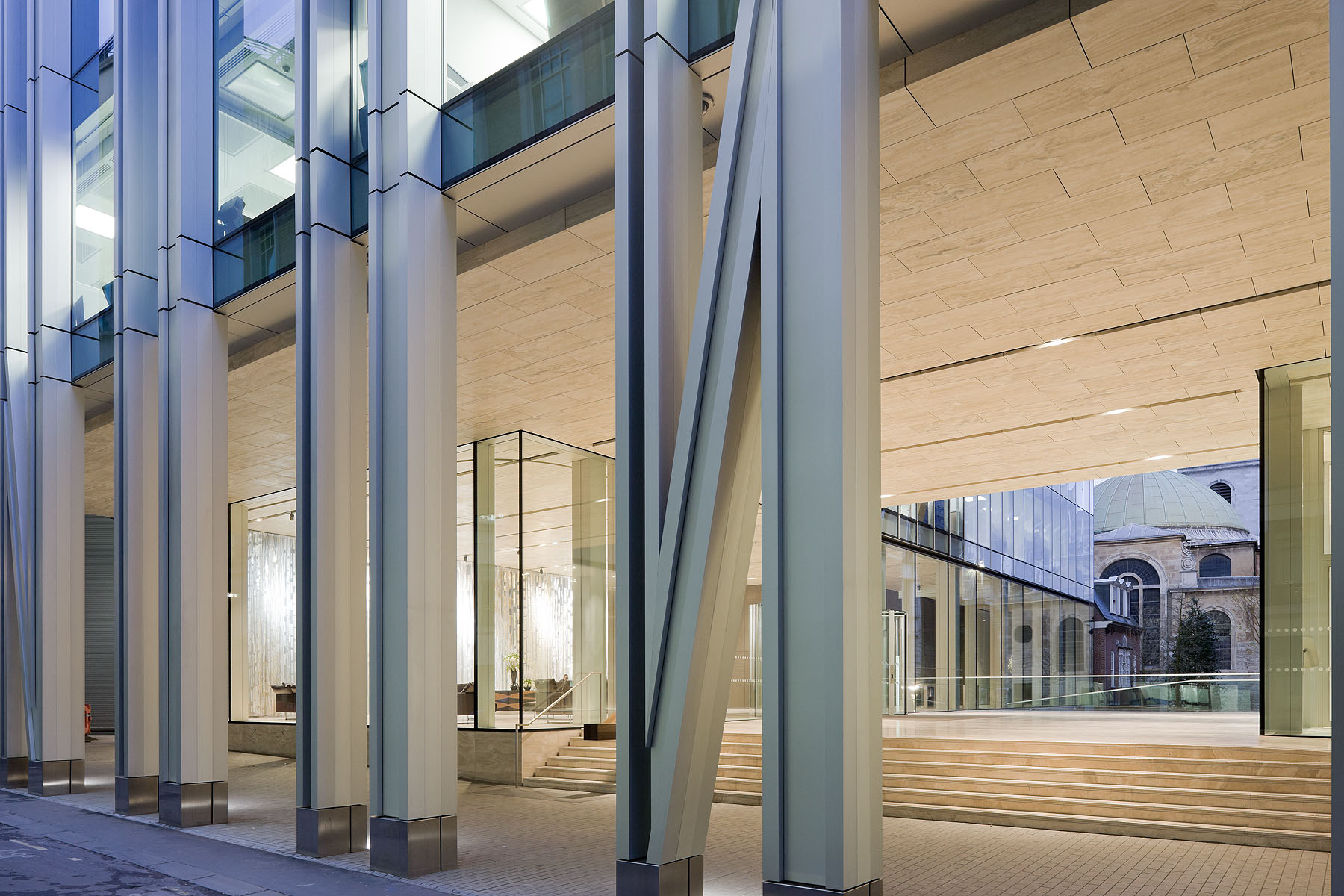 Micheal Kimmelman – The other day I caught up with New Court, the London headquarters for Rothschild Bank, designed by Ellen van Loon and Rem Koolhaas of OMA. Opulent, context friendly, almost stealthy, it’s an “adult building,” as one of the architects who worked on the project half-jokingly put it.

Meaning that it’s not what you might expect from Mr. Koolhaas, who has been heard recently lamenting “the rat race of extravagance” driving trophy architecture before the market tanked, when he was such an emblematic and influential figure. As it happens, New Court was commissioned before the crash but took years to be finished. So like Mr. Koolhaas’s mantra, it’s neatly tailored for a changed climate.

London has a case of what the late critic Ada Louise Huxtable once called Skyscrapers Gone Wild. She was talking about the “supersized, contorted, totally out of context” towers, resulting from a cocktail of new technology and mad money, competing for height and attention, from which this city had once proudly abstained. I looked around town with Ricky Burdett, who teaches urban studies at the London School of Economics. He showed me 122 Leadenhall Street, nicknamed the Cheese Grater, an office building by Richard Rogers going up not far from New Court in the heart of the London financial district. I wondered aloud what Rafael Viñoly could possibly have been thinking when he came up with the top-heavy design for the building that has been nicknamed the Walkie-Talkie, close by.

Across the river, atop London Bridge Station, the nearly completed Shard by Renzo Piano – London’s tallest building – loomed over the skyline.

Neighborhoods are changing too. The master plan for the Olympic Games last summer entailed creating what’s meant to be a prosperous new center in the historically downtrodden East End. Olympic Village is being turned into mixed-income housing and parkland. (James Corner, of Field Operations, who worked on the High Line in New York, is designing part of the park.) As with the Shard, we’ll have to wait to see how it works after it’s finished.

David Cameron, the British prime minister, and Boris Johnson, London’s flamboyant mayor, announced with some fanfare last month a plan to invest $80 million in the construction of a civic center for Tech City, as the blocks of East London near the Old Street Roundabout have come to be called. “There goes the neighborhood,” was the lament of some die-hards in that scrappy start-up community, who feared the area had lost its cachet if government planners wanted to horn in on what has been a bottom-up development.

Their real cause for concern ought to have been the suburban office-park-style building in the drawing that the prime minister and mayor unveiled. A better plan, to upgrade the grievous roundabout itself, should emerge as the project evolves.

The most dramatic transformation is to Kings Cross, long a crime-ridden, impoverished district where the St. Pancras and Kings Cross railway stations converge. Across 20 years or so the area has been changed almost beyond recognition. To complement the renovation of St. Pancras a few years ago the main concourse of the Kings Cross terminal has recently been refurbished with a swooping, pseudo-Gothic ceiling designed by John McAslan. Google plans to put its London headquarters next door. Luxury and subsidized housing have arrived or are arriving nearby, along with commercial development.

The Argent Group, a British developer, is behind this multibillion-dollar makeover. It has stuck to good urban strategies: mixed use, slow growth, pedestrian-friendly streets, sensible restoration alongside new construction, and an emphasis on active and ample public space. A spanking new granite plaza with fountains opened last month outside the Central Saint Martins College of Art and Design, which in 2011 moved into a six-story, 19th-century granary, ingeniously retrofitted by Stanton Williams, the London architects. The design navigates strict conservation guidelines to devise a spare, sleek, soaring interior that doubles as school and new public square.

The development around King’s Cross is gentrifying a former brownfield, which is what some of the Shard’s old-time neighbors fear. That building, a mountain among the pubs and housing blocks, will change the real estate picture in the area. It’s hulking and unimpressive at street level. But adding density at a rail hub makes sense. The prospective mix of offices, apartments, restaurants and a viewing platform in the building, to rival the London Eye, should add jobs and revenue to the area; and the station, which serves 300,000 commuters a day, has been cleaned up and attractively refurbished as part of the project.

And from afar the vertical faceting of the Shard’s facade reduces the impression of bulk. The crystalline effect is subtler than many Londoners feared. The building almost evaporates in certain soft light, its crown dissolving into a mesh of attached screens – a move Mr. Piano tried unsuccessfully at The New York Times building, where the clunky flat roof looks unfinished. Here, by extending the tower so that it tapers to a sharp point, the screens serve the desired purpose.

More than 30 new skyscrapers are rising or soon will in this city. For centuries the dome of St. Paul’s was the highest monument on the skyline, until the National Westminster Tower in 1980. Then came Norman Foster’s Gherkin. Now the race is on.

This is partly the consequence of a vigorous policy by Ken Livingstone, the former mayor, pursued under Mr. Johnson, promoting high-rise growth, focused around mass transit. The policy has brought international architects to the city for the first time in a big way. But many of the projects have been waved through the approval process by a complacent planning system, Rowan Moore, the architecture critic for The Observer, wrote recently.

“Is there anything special about their detail?” he asked. “Is there consistency or integrity in their overall concept? Do they create handsome new public spaces at their base?” Which gets back to New Court, OMA’s 226,000-square-foot headquarters for Rothschild. At 15 stories, it’s no skyscraper, but it is taller than the buildings immediately around it, the tower cutting a profile far more distinguished than, say, the Walkie-Talkie.

The Rothschild family has occupied this same site on St. Swithin’s Lane, an ancient alleyway not 10 feet wide, since 1809. New Court replaces a smaller headquarters from the 1960s, which replaced a Victorian one. Behind the building St. Stephen Walbrook church, by Christopher Wren, an architectural landmark from 1680, had been obscured from view by successive Rothschild offices for nearly 200 years.

OMA’s big idea: cut a passage through the middle of the site, raising the new building off the ground to reveal the church, with a quasipublic plaza that links the covered forecourt of the bank with St. Stephen’s graveyard.

The plan is ingenious, elegant. Now a glass and aluminum colonnade defines the street edge, with a broad portico and pedestrian passage behind, framing the church view. The plan brings transparency, surprise and civic grandeur to a narrow lane; and by revealing Wren’s building, it invents a pas de deux, the Rothschild tower nodding to the tower of St. Stephen.

Among the luxury details: bespoke textiles in private meeting rooms, a timber desk and ornamented curtain in the lofted lobby, and a ground-floor annex for the Rothschild family archive, with hand-carved oak cabinets and old master art. There’s none of the rough and tumble associated with OMA. Everything’s smooth, sleek, a poetry of linked volumes.

I said quasipublic earlier only because while you can now see St. Stephen from St. Swithin’s Lane, you can’t get to it. A gate between forecourt and churchyard is locked; bank guards discourage the curious. So, unfortunately, an architecture of openness meets the architecture of paranoia that has reshaped cities like London and New York for more than a decade.